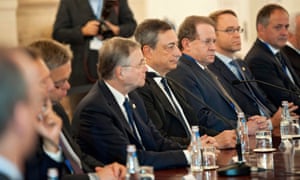 Mario Draghi sent shockwaves through the chambers of the ECB and the euro-area this afternoon with a considerably dovish ECB statement. He noted that emerging markets were still a significant concern to the bloc state and that QE will run to September 2016, or beyond. Draghi’s tone indicated that the ECB were certainly ready to expand the stimulus package, mentioning that the notion would be re-addressed in the December meeting.

Alex Lydall quoted in The Guardian